Metal honeycomb substrates used in catalytic converters are made from extremely thin metal foil, typically with a thickness of just 0.05mm. By comparison the walls of a ceramic substrate may be four times thicker. For this reason, metal substrates offer less resistance to gas flow and therefore can accommodate a given flow rate with a lower pressure drop than an equivalent ceramic substrate. The improved flow properties of a metal substrate mean that, for a given level of pressure drop, a metal substrate can be made with a greater cell density than the ceramic alternative. 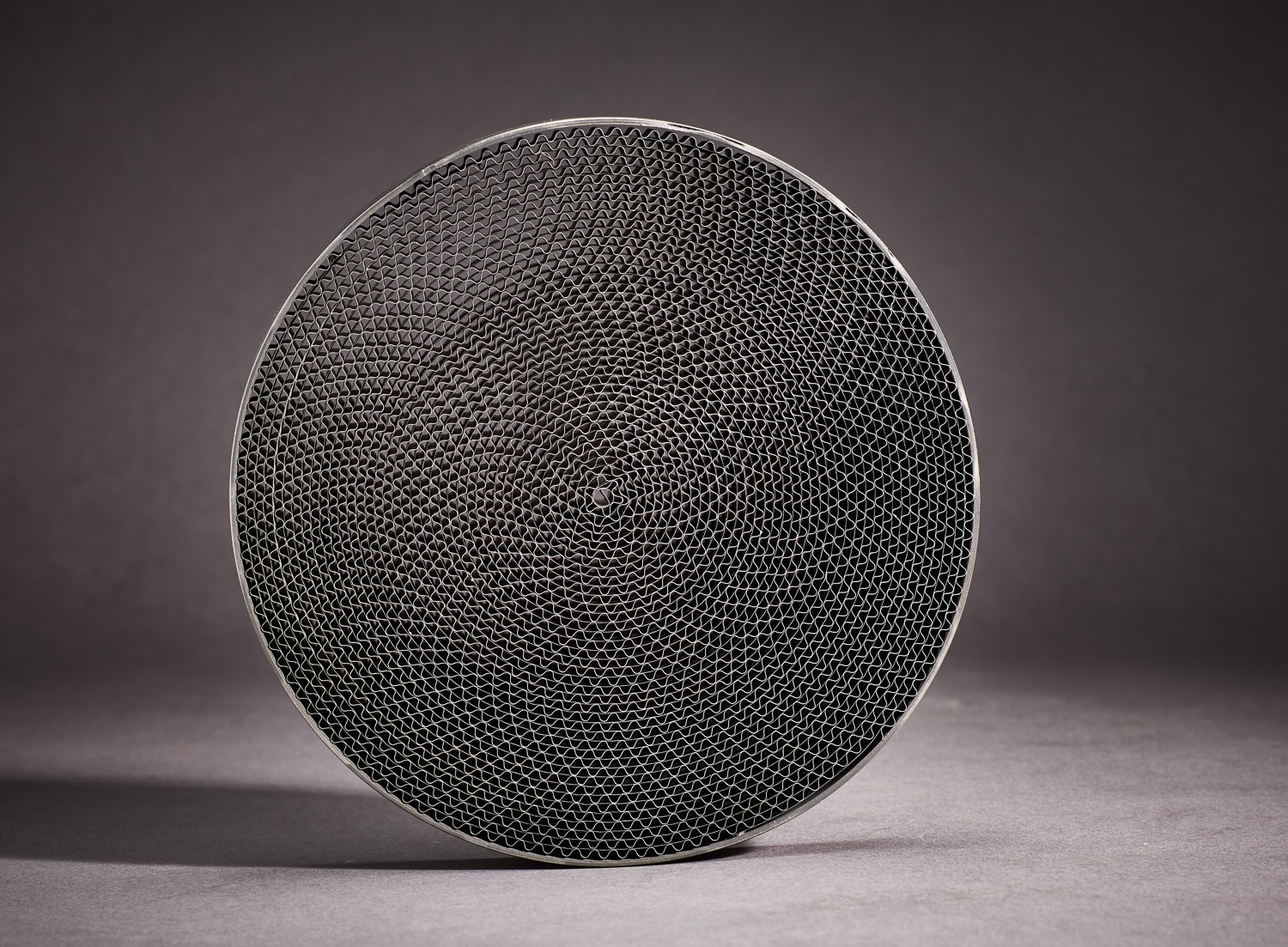 Since greater cell density results in increased surface area, this means that a metal substrate of a given volume will be more catalytically active than a ceramic one. Most metal substrates used in the cooking and heating sectors have between 100 and 200 cells per square inch (cpsi). Metal substrates can be made in a variety of profiles, with round, square and rectangular being most common. Another variable is the pattern of the corrugations in the foil, which can either be straight through or involve changes of direction. The latter option is known as ‘herringbone’ and gives rise to turbulence which increases the activity of the catalytic converter but at the expense of an increased pressure drop.

There are various ways of making metal substrates but the top-quality versions utilize Fecralloy foil which consists of 74% iron, 21% chromium and 5% aluminium. The main advantage of Fecralloy is that, when heated in air, a layer of aluminium oxide forms on the surface which protects the iron from corrosion and also provides a good key for the catalytic coating. Therefore this type of metal substrate is hygienic enough to use in cooking appliances.

To make a Fecralloy substrate, alternating layers of corrugated and flat metal foil are pressed together, with a housing or mantle around the perimeter, and a brazing material is introduced at the points where they make contact. The structure is then heated in a vacuum furnace so that the brazing material forms a strong joint without any oxidation. The result is a very strong honeycomb structure which does not require any additional support and is ready for coating.

In addition to Metal Honeycomb, we currently offer three other substrate options for use in a variety of catalytic converters, depending on your requirements. These substrates are:

Contact Us
Page load link
Manage Cookie Consent
To provide the best experiences, we use technologies like cookies to store and/or access device information. Consenting to these technologies will allow us to process data such as browsing behaviour or unique IDs on this site. Not consenting or withdrawing consent, may adversely affect certain features and functions.
Manage options Manage services Manage vendors Read more about these purposes
View preferences
{title} {title} {title}
Go to Top